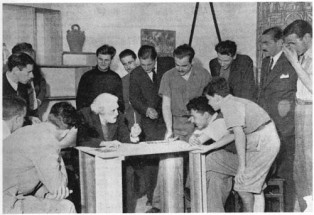 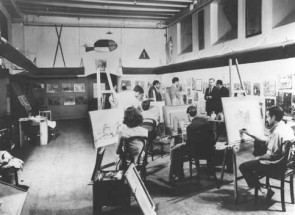 Taller artists and students in the Ateneo de Montevideo, 1955 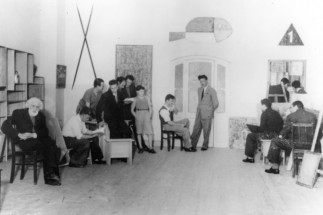 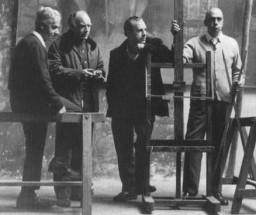 Cover of the 1958 issue of Escuela del Sur, Montevideo

"It must have been an amazing place to study. The pages from Torres-García's notebooks, with their collages of Egyptian, Greek, Indian, pre-Columbian and European art, indicate the invigorating breadth of his interests, and his call for a Latin American art to be "created from the bottom to the top" surely quickened the pulse of the young people who came to him."
Holland Cotter, The New York Times, December 4, 1992


El Taller Torres-García (TTG), the workshop school established by the Uruguayan master Joaquín Torres-García, served as a catalyst for the consolidation of Torres-García's aesthetic philosophy as well as for the elaboration of his theories concerning the role and function of modern art in Latin America. It became a testing ground for ideas regarding the role of constructivism and abstraction in the production of an American art, as well as a laboratory for experimenting with new and traditional materials and techniques. The members of El Taller produced a significant body of work that included painting, sculpture, ceramics, wood and iron reliefs, furniture, murals, and architectural projects. As a model for an integrated artistic community, as well as for the breadth and range of media and materials that characterized its output, the TTG has had no precedents or parallels in Latin America.

Torres-García's return to Uruguay in 1934 brought together established artists and supporters who formed a group [Asociación de Arte Constructivo] (AAC) inspired by his proposal to formulate a new artistic language for the Americas. This entailed the exploration into pre-Columbian art and Torres-García's pioneering conceptualization of the importance of this tradition in the elaboration of a modern idiom for Latin American art. After the eventual demise of the AAC, the notion of indigenous constructivism became one of the fundamental tenets of the TTG.

For young artists, El Taller provided an experimental training ground and a unique space for testing the applicability of modernist principles to the American setting. One of the outstanding aspects of the workshop was its goal of integration of the arts into a total unified environment very much in the tradition of European arts and crafts movements. But Torres-García rejected the industrial, technological orientation of those precedents and instead the members of the TTG experimented with simple materials and innovative techniques.

Like the AAC, the TTG focused its activities on the promotion of the principles of modern art through an active program of exhibitions and publications, the study of indigenous cultures and civilizations, and the formulation of an avant-garde Americanist aesthetic.

After Torres-García's death in 1949, the TTG continued to function for over a decade under the direction of some of the older members (Julio Alpuy, Augusto Torres). These years represent a period of mature development and experimentation for the seminal group of El Taller artists (Gonzalo Fonseca, José Gurvich, Francisco Matto, Manuel Pailós, Horacio Torres), marked by the flourishing of their individual personalities and styles.

Working within the collective aesthetic of the TTG, and always searching for creative solutions to the material limitations of their context, they engaged in projects that encompassed a broad range of media, and produced a wide range of works from traditional paintings and sculptures to furniture and decorative objects. This period also saw their incursion into architecture as part of the aim of integration of the arts, as well as public projects. By the late 1950's, however, the principal members of the TTG had left Uruguay in order to pursue their own careers.

After the official demise of El Taller in 1962, the seminal group of TTG artists continued to develop key aspects of Torres-García's teachings from their own perspectives, and through them a new generation of artists has been influenced by the Uruguayan master's art.

[Excerpted from the essay by Mari Carmen Ramírez in El Taller Torres-García, The School of the South and Its Legacy, University of Texas Press, 1992.]

In June 1991, the exhibition "El Taller Torres-García - The School of the South and Its Legacy" opened at the Reina Sofía Museum in Madrid. This exhibition was the culmination of Cecilia de Torres' decade-long effort to introduce the Taller artists to an international audience. In collaboration with the University of Texas at Austin, the show of over 150 works traveled to the Archer M. Huntington Art Gallery, Austin, Texas; Bronx Museum of the Arts, New York; Museo Tamayo and the Monterrey Museum, Mexico. A smaller exhibition selection has been shown at the Museum of the Americas, Washington, D.C.; Museo Bellas Artes, Caracas, Venezuela; Museo Banco Central, San José, Costa Rica; Iturralde Gallery, Los Angeles, California; Anderson Gallery, Buffalo, New York.