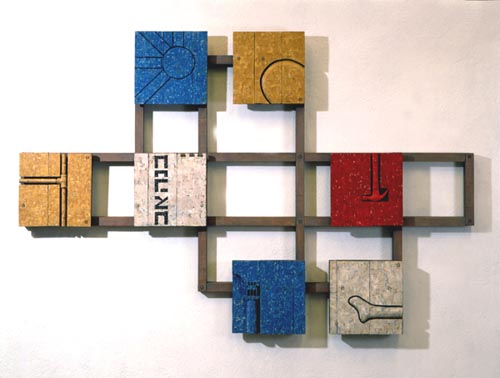 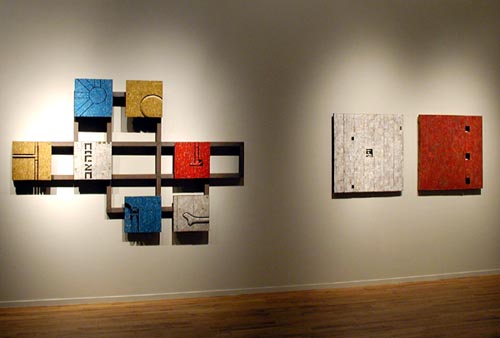 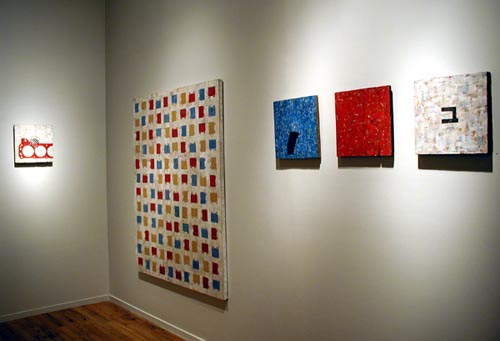 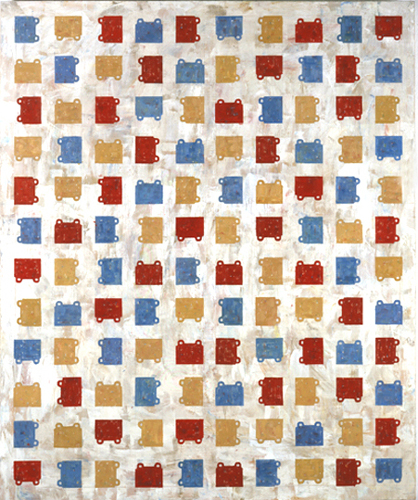 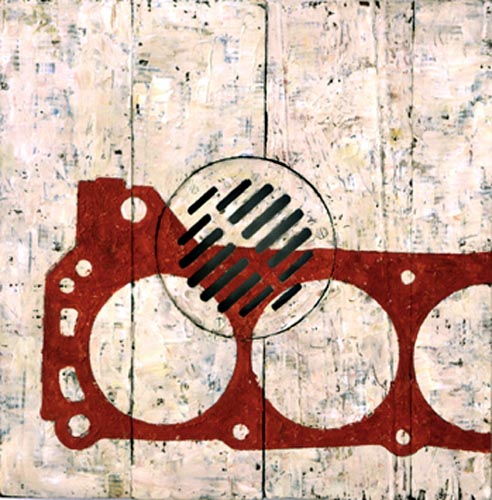 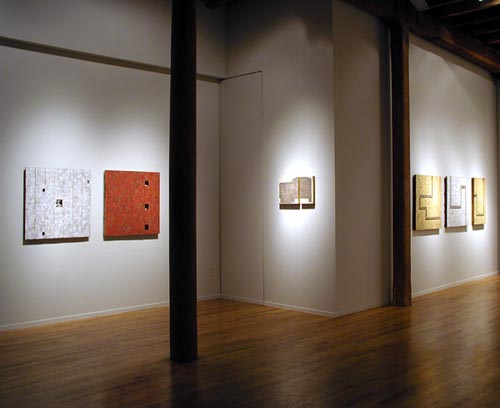 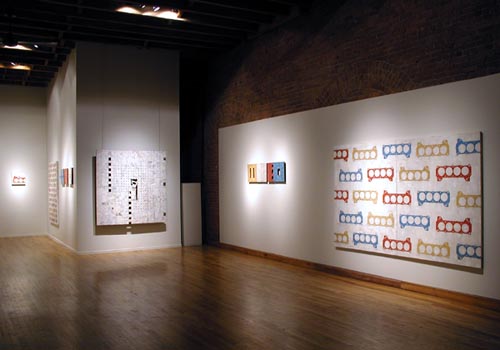 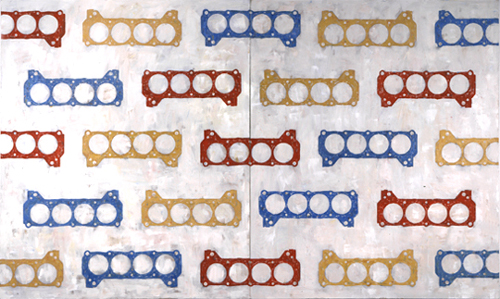 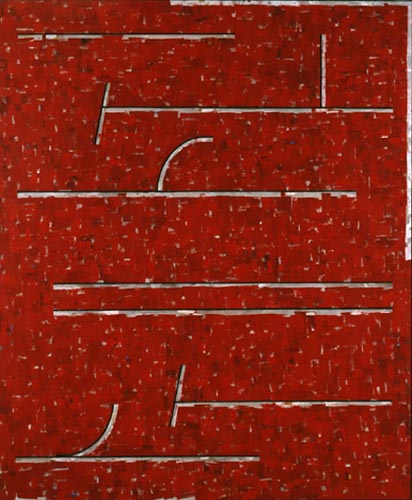 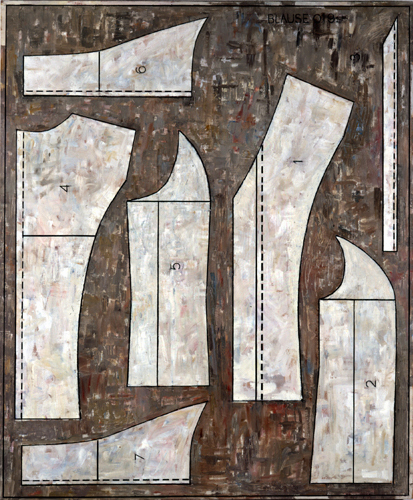 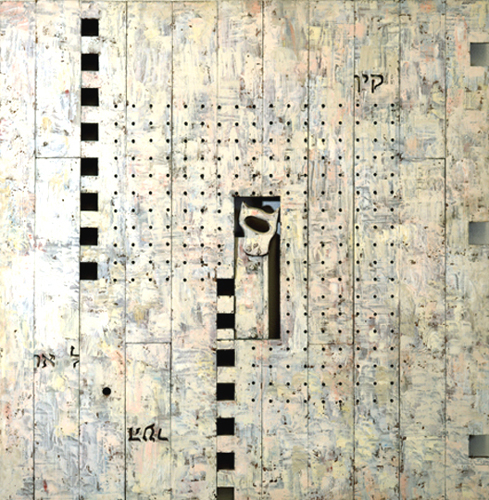 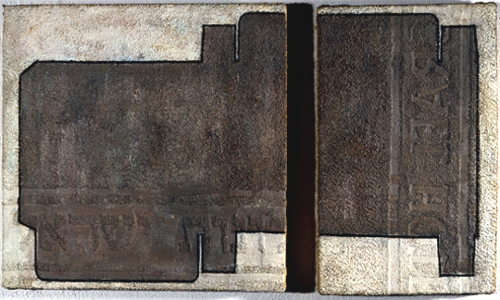 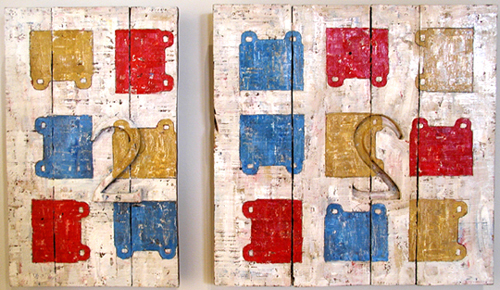 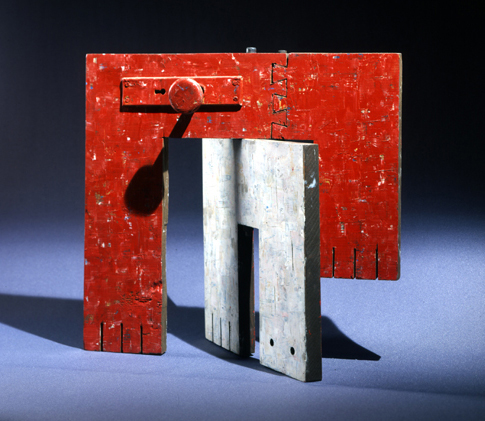 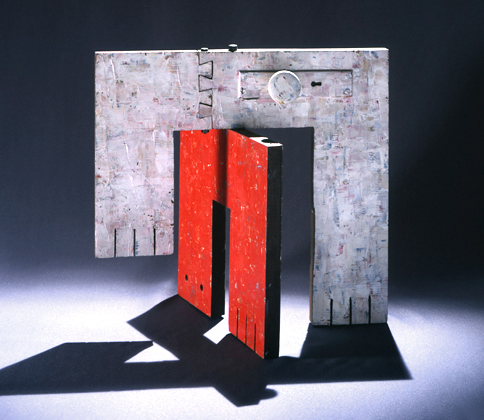 Gutman’s recent works have visual unity and coherence in spite of the diverse objects and images he makes use of. His layering of elements of different nature and meaning, achieve a unified look through their related intrinsic structure.

In Tomb Found in the Future, 2002 a grid of wood strips holds square panels painted in bright colors; in them, Gutman inserted a hammer, in another, a metal pipe. He carved the capitol of a Corinthian column, a femur bone in another, and on a white panel he painted Hebrew letters. The visual presence of letters and their symbolic value has meaning of great significance to him, for example the letter “Beit” in Letter Beit-House, 1998 has a dual reading; visually and symbolically it represents a dwelling place, a house and a habitat for the spirit.

The three-dimensional “real” objects Gutman utilizes in his work are perfect forms for the oneness between their shape and their function, as in Diptych with Faucet, 1999. “When I place an object in my volumetric constructions,” Gutman explains, “I see it as a structure that represents in abstract terms the function for which the object was created. The challenge is to integrate it into the work as a plastic element. But even then, it is inevitable that the object will acquire another kind of meaning, if it is considered as a symbol. In this way, to the strictly plastic relations of size, form, color or placement within the composition, I add relationships of symbolic or conceptual ideas.”

Gutman’s paintings and wall reliefs in bright and earthy colors have a rich surface accentuated by touches of varying hues and tones. In Triptych with Pipeline, 1999, metal pipes nestled in a channel, draw a geometric outline that lead the eye from one panel to the next; the forceful physical presence of the pipes, making right angle turns by way of corner elbows.

Forms that imply the possibility of volume but are in fact flat intrigue Gutman. In Blause 019, 2000, the third dimension is referenced by the pattern for a shirt. In Untitled, 2002, a diptych painted on a towel from Israel, he painted the cutout of a cardboard box as it is in its flat condition before being assembled. Letters woven in the towel suggest the bi-dimensional quality of language. As a structure, language exists on the most abstract of levels and its symbols (letters, hieroglyphs) are by definition bi-dimensional.

In another Untitled work of 2002, contact transfers of mechanical parts, such as that of a gasket, suggest the complexity of motor engines; a reference to “mechanical” structures which in theory are simple but are in fact complex.