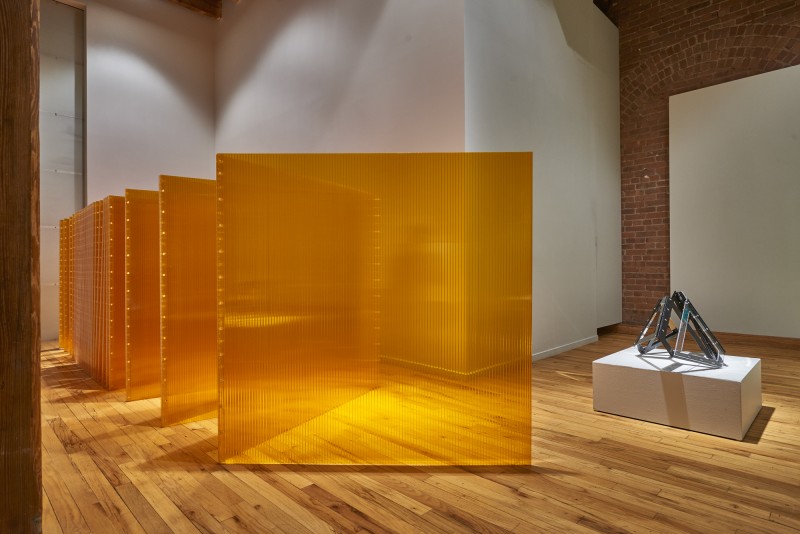 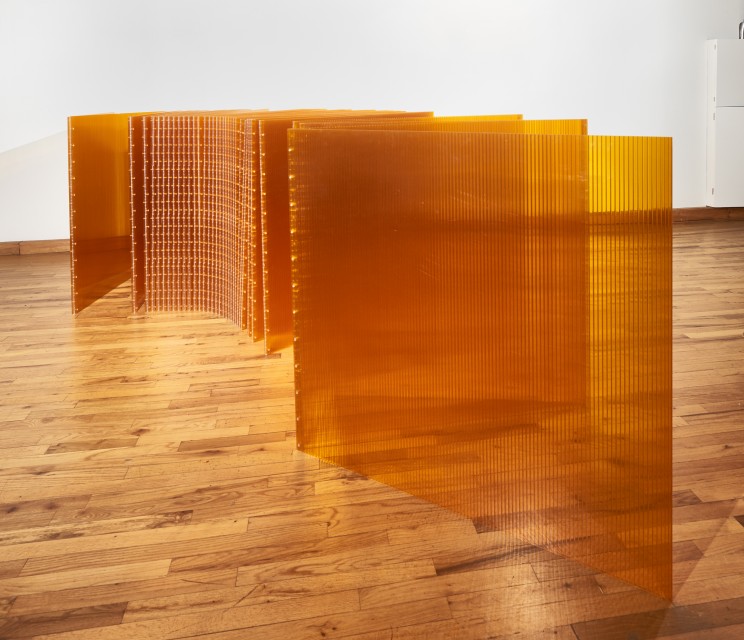 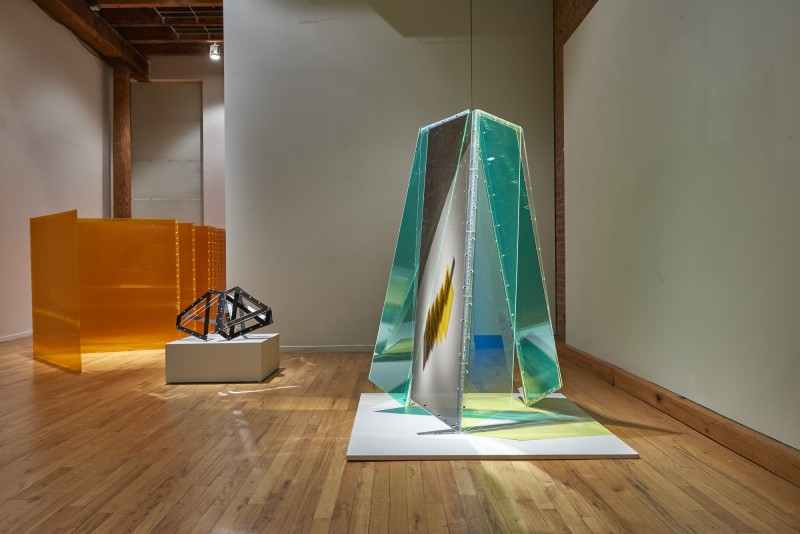 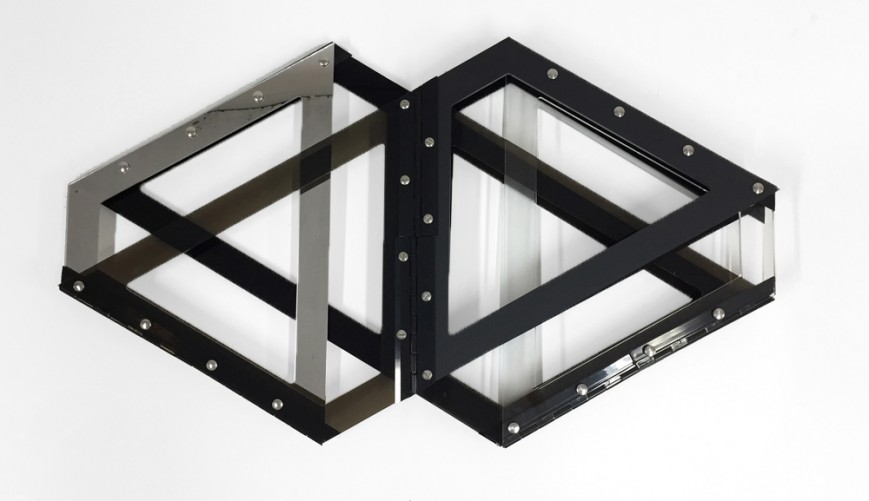 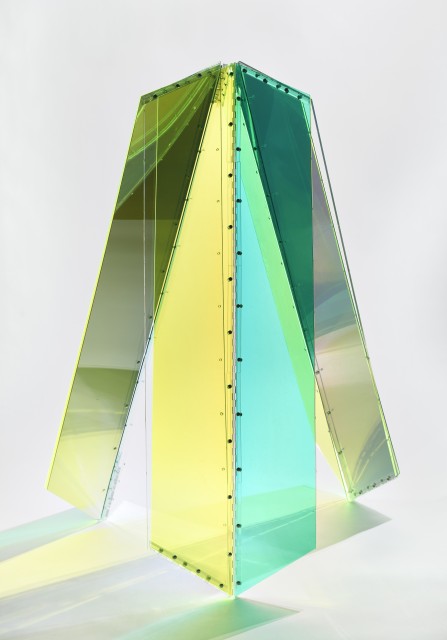 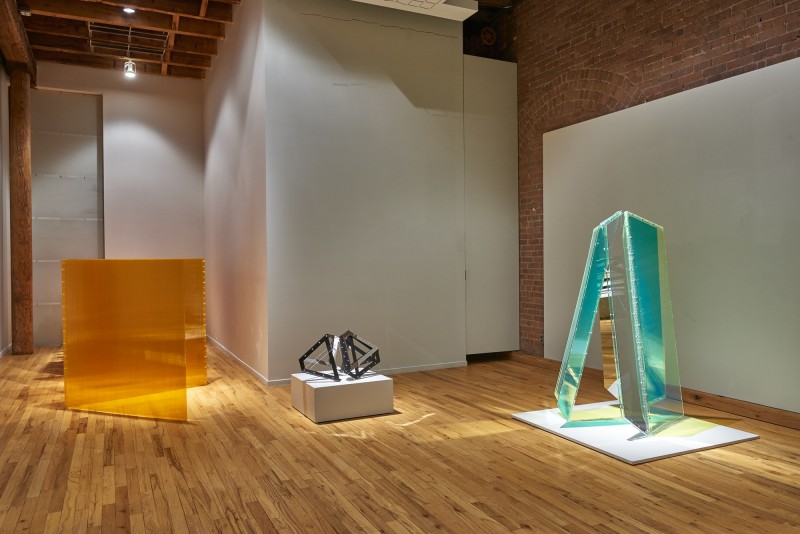 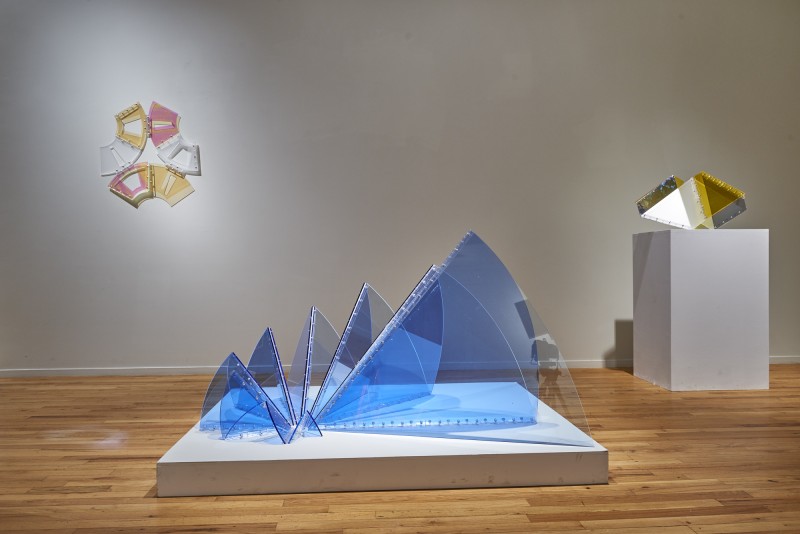 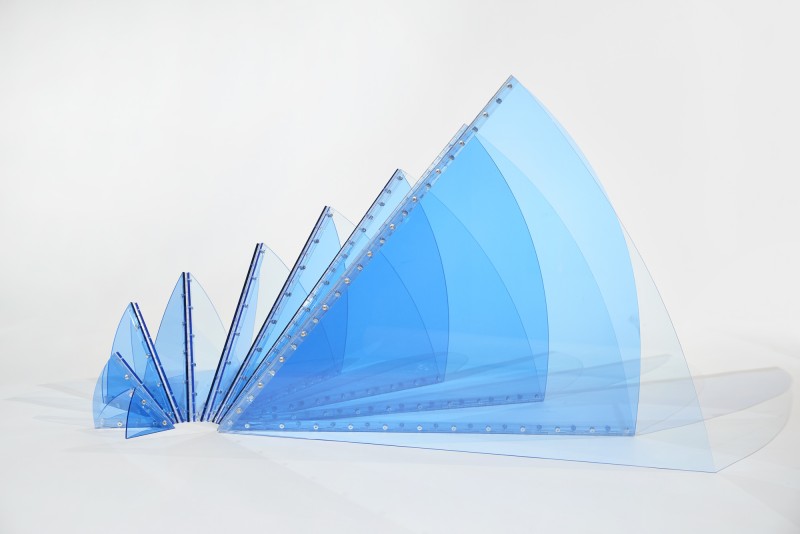 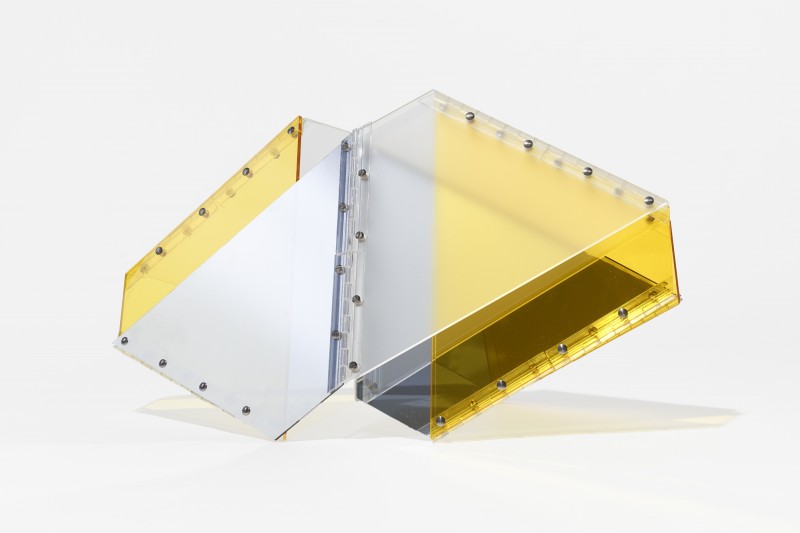 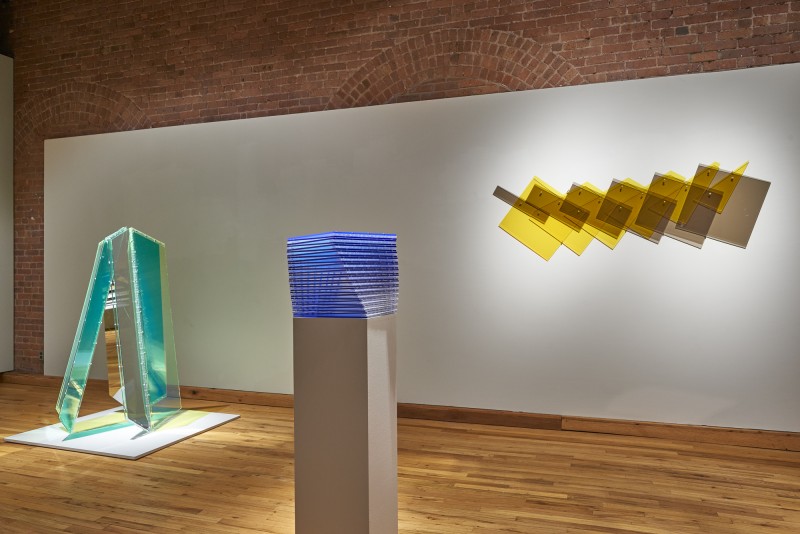 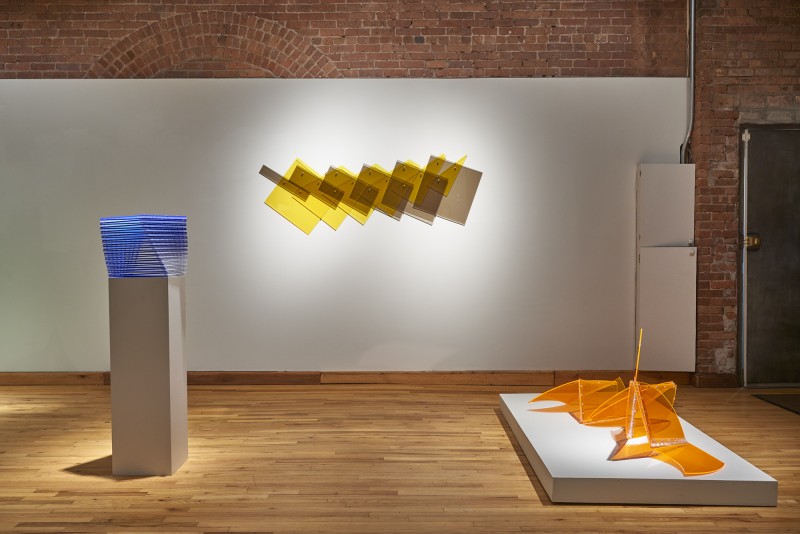 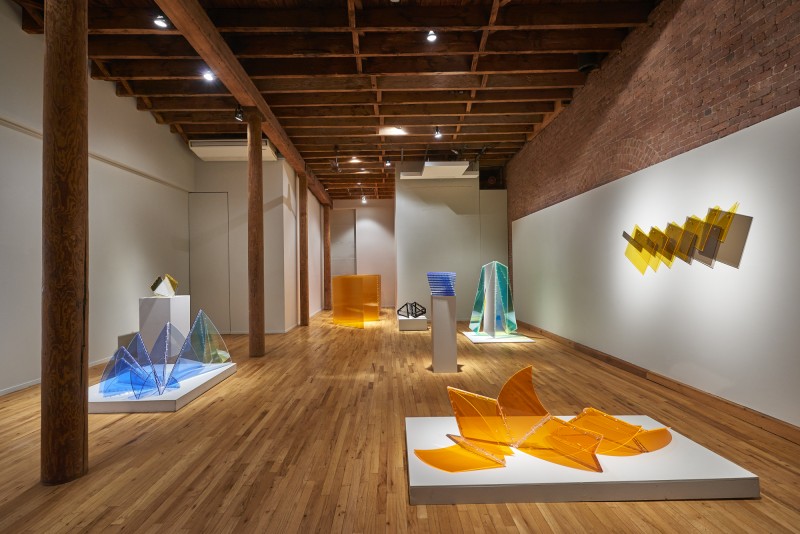 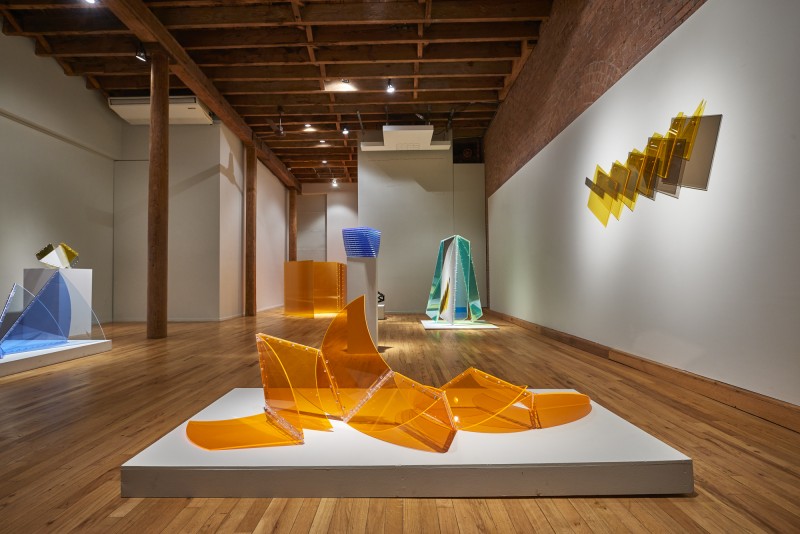 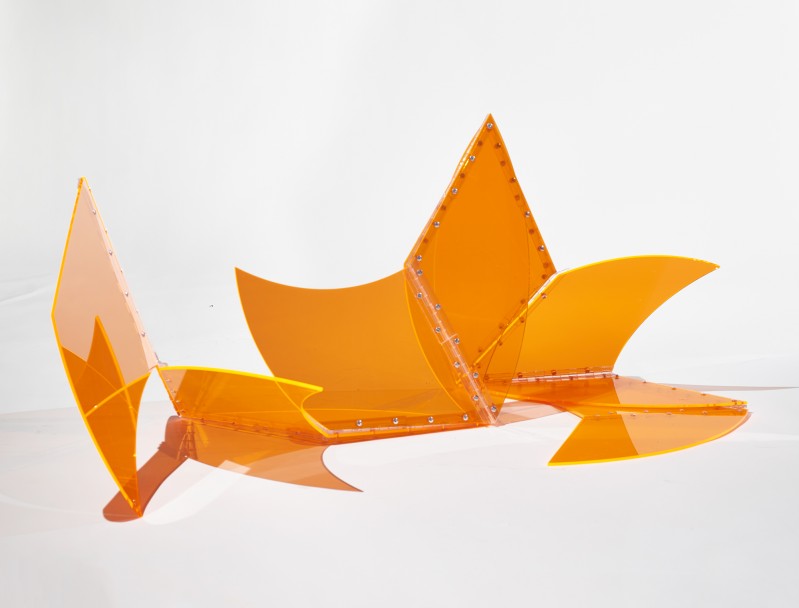 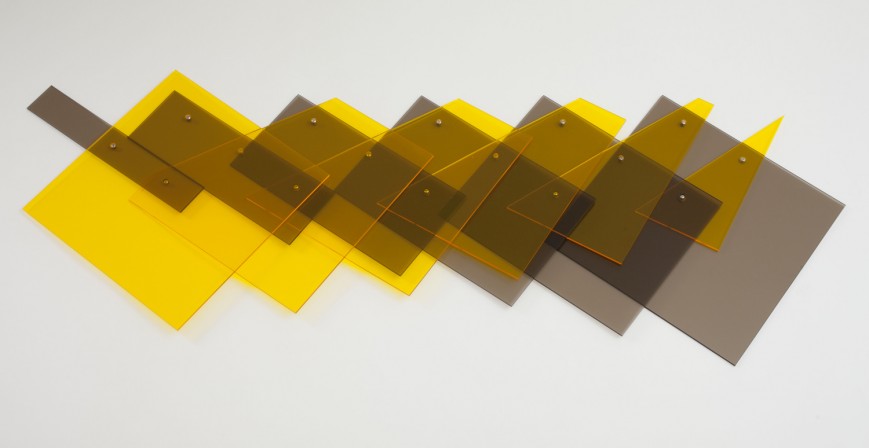 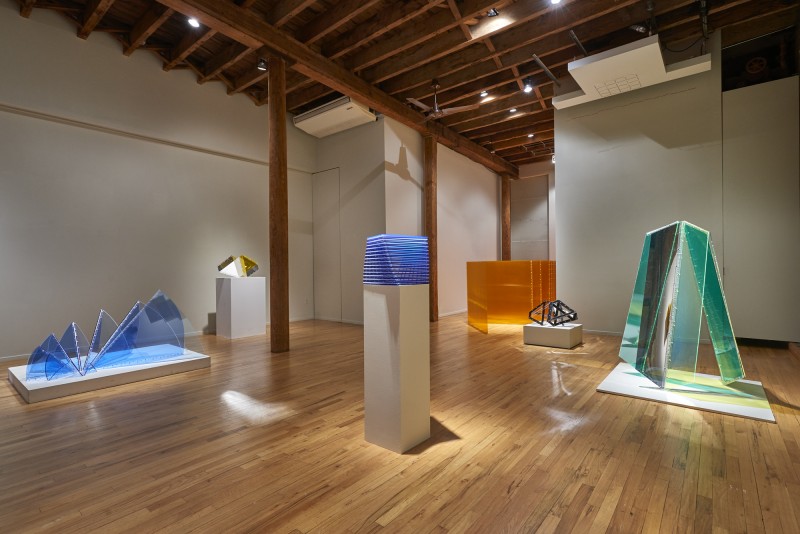 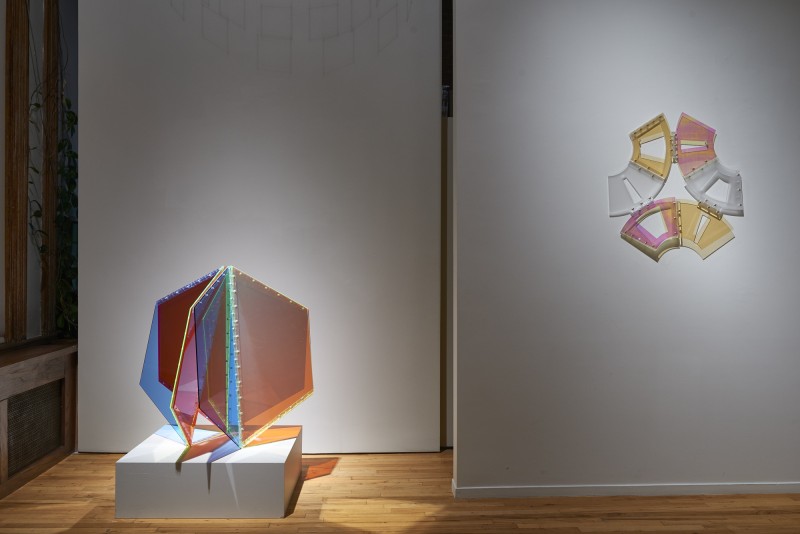 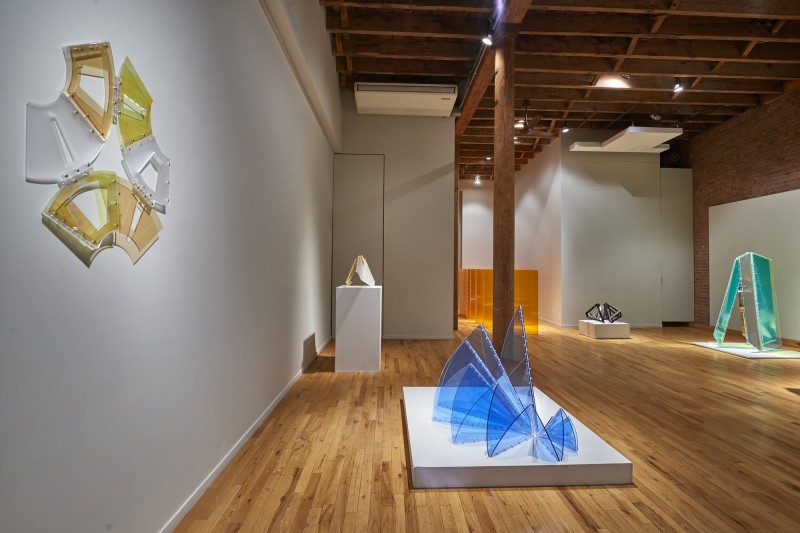 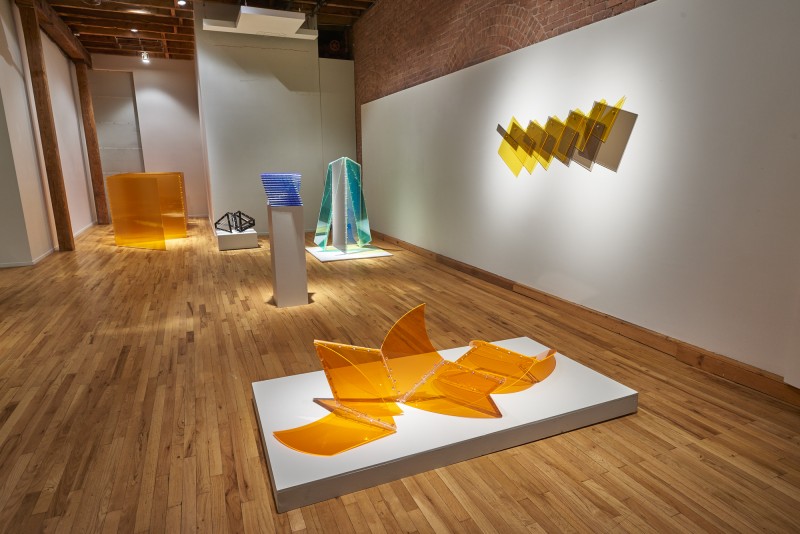 In conjunction with our booth at Frieze New York dedicated to artist Marta Chilindron, Cecilia de Torres, Ltd. is pleased to present “Geometry at Play,” a solo exhibition focusing on the artist’s interactive sculpture and installation work.

Marta Chilindron creates malleable geometric structures that invite visitor participation: her hinged pieces can be opened and closed to alternate between flat, abstract compositions, and fully expanded, three-dimensional forms. Employing both iridescent and reflective acrylics of various hues, Chilindron creates objects that change in both shape and color according to the viewer’s perspective and physical engagement with her work.

Chilindron’s sculptures in “Geometry at Play” are all derived from basic forms—many of them found in nature—such as cubes, spheres, and triangles, all of which accentuate the artist’s vibrantly chromatic aesthetic. Spectators are encouraged to manipulate, reconfigure, and play with these objects, to move and to alter their forms. In fact, the works are activated by the visitor’s participation.

Also on display is the large-scale, immersive Cube 48 Orange (2014). This visually impressive bright orange structure, when folded up, creates a 48-inch cube, and when fully expanded, can stretch a New York City block. Viewer involvement is integral to this piece which encapsulates the playful nature and spectacle of kinetic art. As visitors walk around and within its labyrinthine construction, they interact with the work on a direct, corporeal level: their physical presence and engagement with Cube 48 Orange transforms it from a sculptural installation into both an environmental work, and a physical experience in and of itself.

Chilindron’s works on view in “Geometry at Play” all bring forth the contradictory yet inherent nature of the constancy of change: they reflect the instability of movement, of perception, and of form; they reveal the continuous change in our uncertain realities, and the inherent impermanence found in the structures of nature. Through the visitor’s playful interaction with Chilindron’s work, these geometrically malleable pieces activate a dialogue regarding the constant flux in our ever-shifting perceived experiences.

In 2010, Chilindron was invited to create a public installation as part of the Fokus Lodz Biennale in Poland, and her sculptures were featured as a special project at the Museum of Latin American Art (MoLAA) in Long Beach, California in 2013. The artist had a retrospective exhibition at New York University's Institute of Fine Arts in 2014, and at Point of Contact Gallery at Syracuse University in 2018. Chilindron is currently working on Houston Mobius, a large-scale sculpture commissioned by the University of Houston for the inauguration of their Temporary Public Art Program. She has been invited by El Museo del Barrio to be part of their "Diálogos" section at New York’s 2019 Frieze Art Fair.